With the COVID-19 pandemic closing down all of Major League Baseball for the foreseeable future, all we can do is look ahead at futures odds and breaking news on SBD for what’s next in the MLB. For most teams, the most exciting players are yet to hit the major leagues. In the past few years, we’ve seen future stars such as Juan Soto, Ronald Acuna, and Pete Alonso burst out in their rookie year and make a huge impact on their respective teams. With no MLB games to watch, let’s take a look at the NL East’s best prospects.

Farm System Rank: 4 (according to MILB.com)

The first team on this list features the most boisterous farm system of them all. The Atlanta Braves already have a lot of young talent on their MLB roster with Acuna, Ozzie Albies, Mike Soroka, and more.  It seems almost unfair they can have a top-five farm system with an already stacked roster, but that is indeed the case.

The Braves’ top prospect is Christian Pache, a center fielder who currently plays in the Braves Triple-A affiliate, the Gwinnett Stripers. Pache is seen as the best defensive prospect in the minor leagues and has the potential to be a gold glove player in the future. Pache is likely to make a Major League appearance in 2020 and be an opening day player by 2021. The Braves roster is already set up fantastically for Pache. Outfielders Nick Markakis and Marcell Ozuna will have expiring contracts after the 2020 season, and with Acuna, Austin Riley, and other rotational outfielders, Pache will have an easy transition into the starting center field role.

The teams’ other top prospects include Drew Waters, an outfielder who will most likely be a starter by the 2022 season. They also have three right-handed starters in Ian Anderson, Kyle Wright, and Bryse Wilson who will all make appearances during the 2020 season. It is safe to say that the Braves are set for the future.

The Miami Marlins have spent the last three years rebuilding and bolstering their farm system, so it’s no surprise they are ranked so high. After trading away stars such as Giancarlo Stanton, Christian Yelich, J.T Realmuto, and Marcell Ozuna, the team is stacked with young players. They already have some promising players on the major league roster such as Isan Diaz, Brain Anderson, and Jorge Alfaro, who will be able to keep starting spots in the future. But the real stars will come from the minor leagues.

The Marlins top prospect is right-handed starter, Sixto Sanchez. He was acquired in the J.T Realmuto trade along with Alfaro back in Feb. 2019. Sanchez is the fifth ranked right-handed prospect in baseball and will likely make his first MLB appearance in 2020. Sanchez will be in the team’s rotation by 2021 and their ace by 2023. The Marlins have their entire starting staff under contract until the 2022 season, which will make it easy for him to transition as a full-time starter.

Other top prospects include J.J Bleday, a 22-year-old outfielder who is predicted to come up in 2021. He is joined by shortstop Jazz Chisolm, outfielder Jesus Sanchez, and pitcher Edward Cabrera on the MILB Top 100 list. 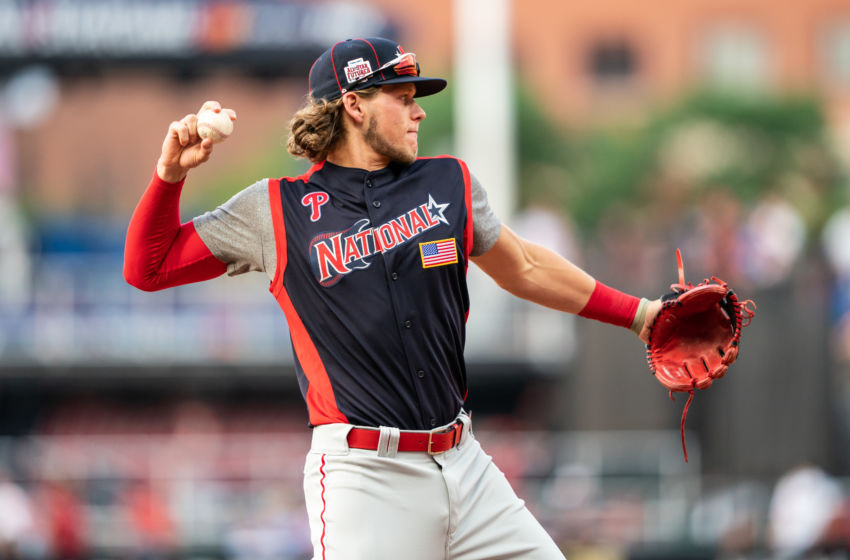 After two top 10 teams in the division, we take a step back to the Phillies, the 20th ranked farm system in the MLB. The Phillies went all in last year trading for J.T Realmuto and Corey Dickerson as well as signing Bryce Harper and Andrew McCutchen. Because of this, the farm system lost some valuable players such as Sanchez, leaving them with a questionable future.

Philadelphia’s top prospect is Alec Bohm, the no. 30 prospect in the minors and the no. 1 third base prospect. Bohm is known for his power in the minors, where he had over .500 slugging last year. The Phillies have already made moves to fit him into the future plan by not re-signing third baseman Maikel Franco and signing replacement Didi Gregorious to a one-year deal. Bohm will likely start for the team in the 2021 season.

Bohm is joined by right-hander Spencer Howard in the top 40, who will likely be an end of rotation starter by the 2021 season. Also on the top 100 list is shortstop Bryston Stott, but he won’t be playing Major League Baseball until 2022. Current shortstop Jean Segura will have his contract expire after 2023, leaving a spot for Stott to come in.

Of all the teams in the division, the Mets are likely in the worst spot for the future. With no youth in the pitching staff and with only two starters under the age of 26, the team needs to make moves to improve the farm system. Though they do have bright spots such as Alonso and Jeff Mcneil, they don’t have enough young firepower to compete with a team like the Braves.

The team’s top prospect is shortstop Ronny Mauricio. Mauricio and catcher Francisco Alvarez are nos. 62 and 63 in the top 100 rankings, and neither player is ready to play until 2022. They will likely replace current starters Wilson Ramos and Robinson Cano when they are ready to play.

The only prospect likely to play this season is shortstop Andres Gimenez, a 21-year-old currently playing in Triple-A. Apart from Gimenez, we likely won’t see much change in the Mets team for the next few years.

Though the Nats have the worst farm system out of all NL East teams, they make up for it with their young players already in the MLB. Arguably the best young star in the MLB, Juan Soto, is joined by Victor Robles and Trea Turner to form one of the best young trios in baseball. On the prospect side, though, it is a little bit dry.

The Nats have a very top-heavy minor league system. While some teams have 3-6 players in the top 100, the Nats only have two. One of those, however, is the 21st prospect in the MLB Carter Kieboom. He will start this year as the Nats starting third baseman and looks to be a Rookie of the Year candidate in the National League. Apart from Kieboom, however, the Nats only have one more prospect in the top 100, Luis Garcia at no. 97. It is safe to say that the Nats don’t have much depth in the minors, but with the young talent already on the team, they should be set for the future.

The future is extremely bright in this division, and it is likely to be competitive for the next decade. Rivalries such as Soto vs. Acuna for baseball’s best young player is already powerful, but we may see even stronger rivalries from these players. Bohm vs. Kieboom for the division’s best third baseman, or Sixto Sanchez vs. Soroka for the best young pitcher. This will be one of the most intriguing divisions for the next decade in baseball, and even if we can’t watch right now, it’s time to get excited about these young studs.

Recap of The Last Dance, Episodes One and Two

@rui_8mura has been on a tear this season for the

Happy Halloween, brought to you by @terry_25 🎃

This error message is only visible to WordPress admins


Error: API requests are being delayed for this account. New posts will not be retrieved.

SCENES FROM THE SIDELINE

ABOUT US
Founded and run by college students, the Sideline Observer is a D.C. based media organization providing the latest takes in sports and culture.
FOLLOW US
Copyright © 2019 The Sideline Observer. All rights reserved.
MORE STORIES

In Defense of D.C. Sports: A First-Class Sports Town

Every MJ vs. Lebron Debate Ever

Despite the Nats’ Recent Struggles, Don’t Count Them out for a...